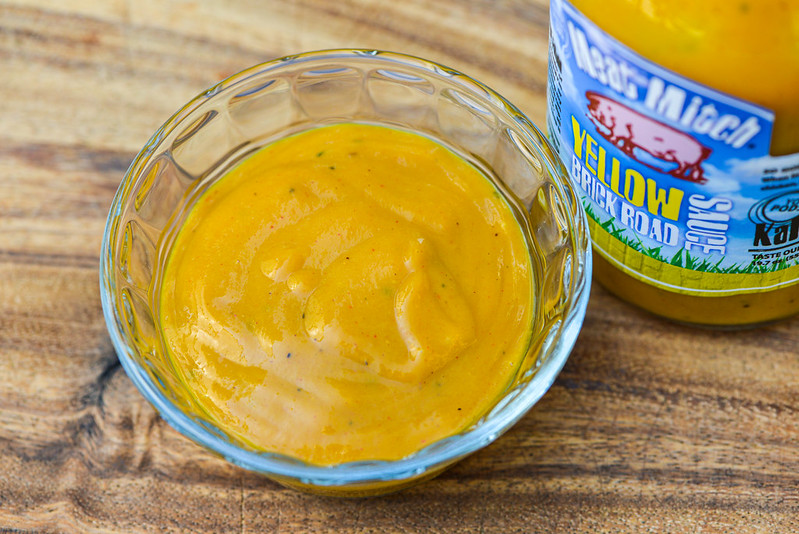 Mitch Benjamin was just starting his fledging Meat Mitch brand when I randomly picked up his first sauce to try out over 10 years ago and fell in love with it instantly. Over the years, I’ve followed Mitch’s barbecue journey that brought him success on the competition circuit, had him become a semi-regular cook for the Kansas City Royals, and opening two restaurants. The first is called Char Bar Smoked Meats and Amusements in Kansas City and his latest is more simply named Meat Mitch in Leawood, Kansas. Mitch had slowly added a couple sauces to his line-up that I eagerly tried out as they were released, but he more recently introduced three new recipes all at once and I bought them all to continue my own journey with this brand.

Yellow mustard dominants the aroma of this sauce with its unmistakable tangy and pungent character. There is barbecue depth though starting with sweetness that mainly just takes the edge off the pungency, a kick of black pepper sharpness, and Worcestershire, which lends a light savory quality.

This semi-glossy sauce unsurprisingly has a mustard yellow hue and is opaque. You can see some spices dotting the sauce in small specs along with less numerous, larger black pepper bits. This sauce’s thickness sits right about at the medium mark and it has a consistency like mustard with added honey to render it a bit syrupy. From a suspended spoon, the sauce first releases in one large drip that’s followed by an uneven pour that doesn’t take long to change to a few slow drips and then stops, leaving a thick layer of sauce left clinging to the silverware.

Out of the Jar

The first taste of this sauce has the pungent stamp of yellow mustard, but when you might expect the heat and sharpness to increase, it does the opposite as sugar and honey create contrast and form the initial building blocks of a barbecue profile. As the sauce settles on the tongue, the honey flavor takes a short ramp up that’s quickly washed away by a vinegar tang that acts a neutralizer, which allows tastes of Worcestershire, garlic, and onion to come through. After that, mustard, vinegar, and black pepper work together to ramp up to a tongue tingling heat. A touch of smoke comes in right at the end to add another dimension to the sharp and pungent aftertaste. 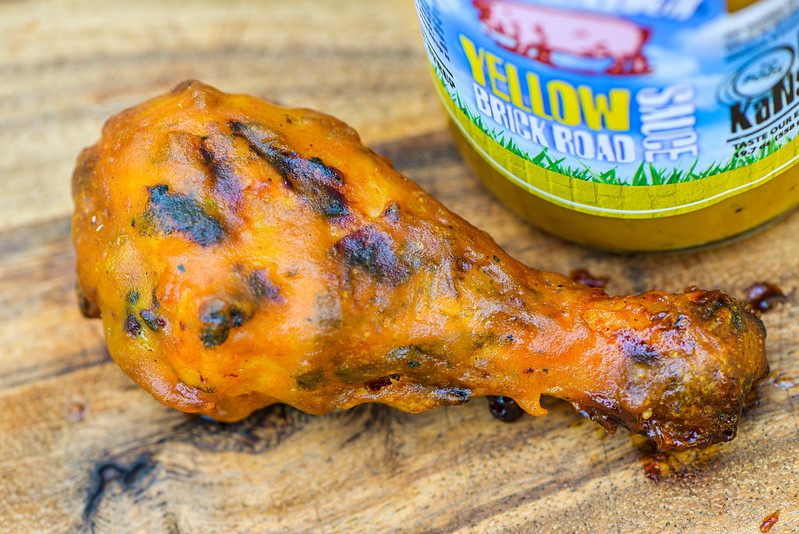 This sauce coated the chicken in a medium, uneven layer that baked down in a rather splotchy fashion over indirect heat. I was expecting this to lead to heavier than normal sauce loss over direct heat, but that was not the case with only a little sauce being lost, while what stayed put caramelization well in spots. With a boost of sugar, the sauce tasted more solidly barbecue after being cooked. The mustard prominence backed down, which allowed the spices and Worcestershire to come more to the forefront, especially after getting a few bites into the leg. The enhanced sweetness meant that the heat wasn’t quite as strong, but a noticeable black pepper kick hit closer to when the chicken was almost done being consumed. This sauce did have a slight grittiness to it, which is not uncommon when cooking with mustard-based sauces over high heat.

Being on this Meat Mitch ride has had a lot of highs, while a couple small valleys along the way too. For me, Yellow Brick Road feel on a downhill section, but stopped well before any low point. This sauce is going to hit well with those fans of yellow mustard, because it tastes more solidly like that ubiquitous condiment than many other contenders. That may make this a perfect score sauce for some, but I’ve found mustard sauces that work in a bit more barbecue complexity are more successful for my taste buds. I was feeling the balance and layers of this sauce more after it was cooked, when a boost of sweetness tempered the mustard bite and allowed ingredients that were more in the background out of the jar to come into the forefront. I think if you’re all in on yellow mustard, there’s nothing this sauce isn’t going to do well for you—I think it would be a really compelling condiment substitute for common things like burger and hot dogs, providing a comforting mustard bite with enough extras thrown in add a uniqueness as well. Since I liked the sauce better cooked, I would personally use it on racks of ribs or as a baste for chicken where its enhanced barbecue profile would be paired up quite well to its host meat.