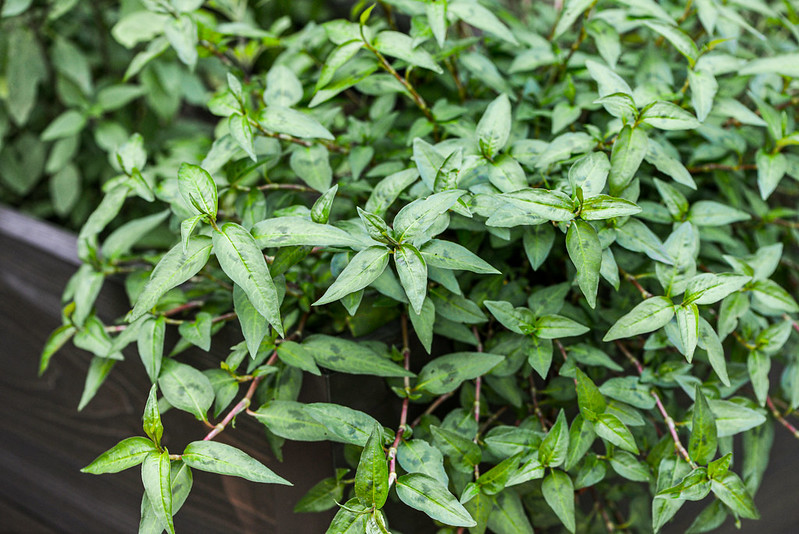 Last summer I started a small raised bed garden where I planted a mix of herbs and vegetables. I found growing everything rewarding, but the herbs were undoubtedly the more useful thing for me as I used them constantly in my cooking, whereas the vegetables were a one-time deal that took a few months to fully mature. So when this spring hit, I decided to go all in on the herbs and had a healthy and overflowing amount by the time summer came around, leaving me in state of always looking for ways to use them. Rau ram was the most challenging herb for me to use since it was the one I was least familiar with and that plant really exploded more than any other, which had me searching for recipes that use a ton of this stuff, which is how I found my way to coi ga bap cai, or Vietnamese chicken salad.

So here’s that rau ram, just about a month after planting and already growing like crazy. I ended up planting this herb, which is also known as Vietnamese coriander or Vietnamese mint, because I wanted a mix of my most frequently used herbs and ones that are not procured easily in supermarkets. I don’t think I had actually cooked with rau ram in the past, and I initially found the taste to stand out so much that it was hard to use without it overpowering a dish. I think that was mainly because the herb was new to me, but it does pack quite a kick and isn’t really like any other herb I’ve had before. I’ve seen it described as kind of like a minty super concentrated cilantro, and while I get that, the description doesn’t hit completely right for my taste buds. Coi ga bap cai relies pretty heavily on rau ram, but if you can’t get it, a combo of cilantro and mint would do well, and I think tossing a little Thai sweet basil into the mix would actually get you closer to the the rau ram flavor. 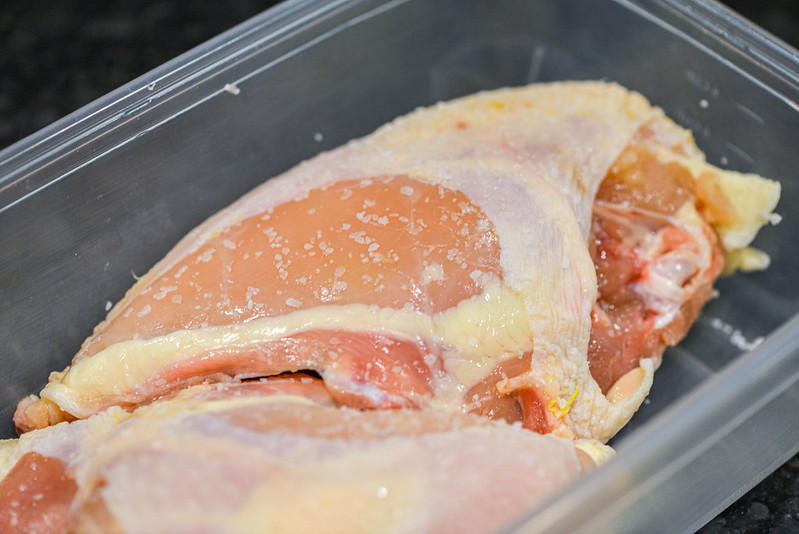 This chicken salad doesn’t traditionally rely on grilled chicken, but I was grilling something else on this day and if I chose to take advantage of the already heated grill to cook the chicken, my dinner got the bonus of being something I could share on this site if it turned out well. I didn’t want to do anything crazy to season the chicken itself since it’s meant to take on the flavor of the dressing, so to prep the meat I merely sprinkled on some salt and then placed the two chicken breasts in the fridge to brine. 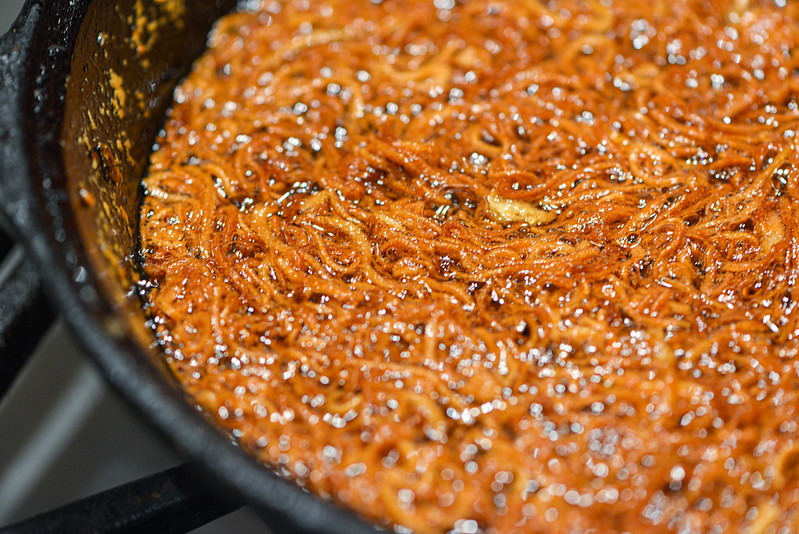 Beside the rau ram, the other thing that attracted me to this dish was it was topped with fried shallots. I had recently eaten through my stash of these amazingly versatile and flavor packed morsels of awesomeness, so I was in need of making a new batch. I didn’t include the fried shallot production in the recipe—you can find the process here—but they’re super simple to make. You just have to thinly sliced up a bunch of shallots and cook them in oil heated to around 250°F until they turn light golden brown. You have to act quick to remove and drain the shallots once they hit a shade lighter than fully golden brown because they continue to cook a bit out of the oil—my batch was on the darker side because I stopped to take a quick photo when they were the perfect brown color you see above, and the extra 30 seconds or so pushed them darker than I would have liked. 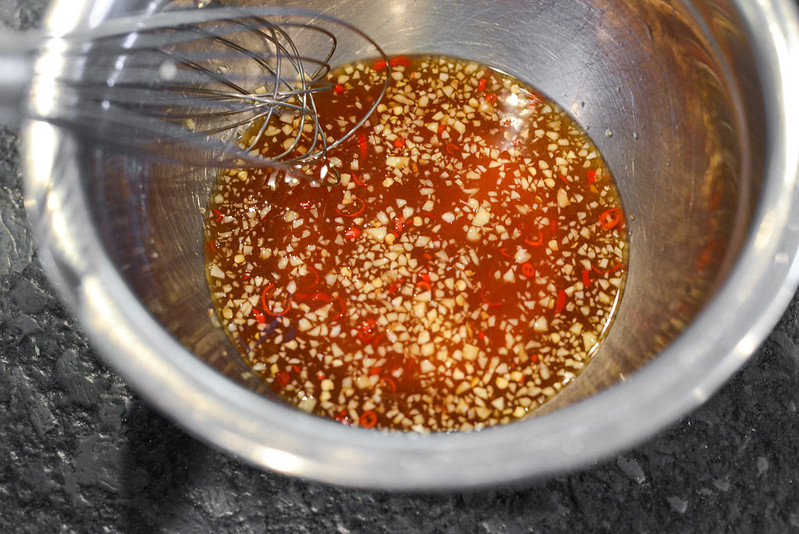 The dressing for this salad is essentially nuoc cham, which is the Vietnamese fish sauce and lime juice mixture you’ve likely had if you’ve ever eaten at a Vietnamese restaurant before. I noticed from other recipes that the dressing is often less watered down than the nuoc cham recipe I use, so I adjusted accordingly and also gave it a little more flavor by adding more garlic and Thai chilies than I use in the nuoc cham I make as a dipping sauce. 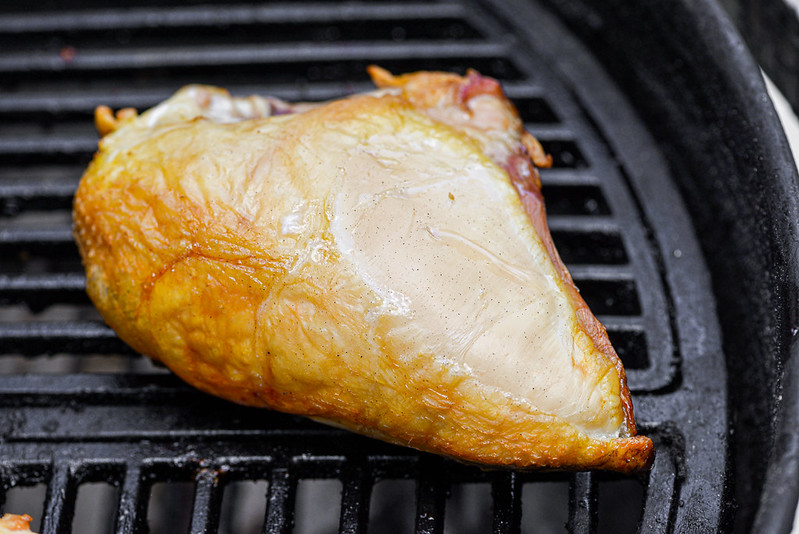 After I had finished what I was previously grilling, I merely took the chicken and set it over indirect heat, covered, and let it cook with the medium-high heat that was being outputted. I kept an eye on the internal temperature after about 15 minutes of cooking using my Thermapen. Once the center of the meat hit around the 145°F mark, I removed it from the grill and let it rest at room temperature for about 20 minutes. Then into the fridge the chicken went to chill completely. 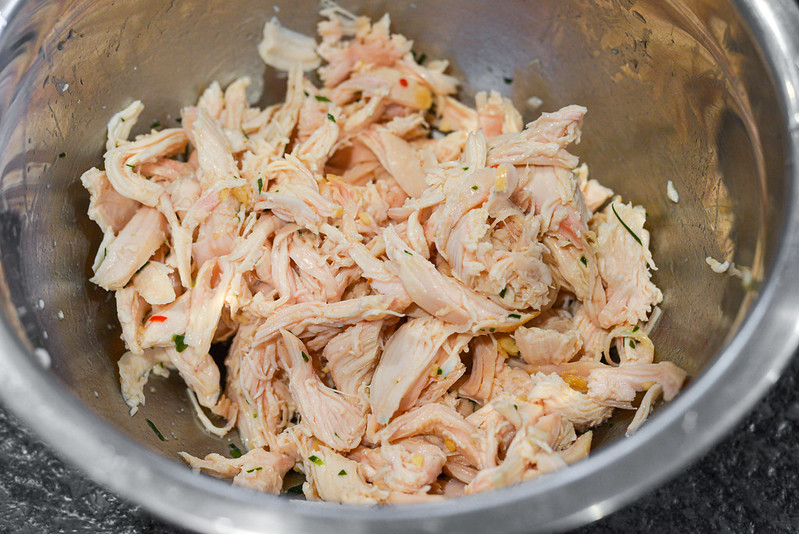 Once dinner time hit, I removed the skin from the chicken and pulled the meat into large chunks. I then began the salad assembly by tossing the chicken with a few tablespoons of the dressing and finely chopped lime leaves. Next. the rest of the salad ingredients went in—napa cabbage, sliced onions, julienned carrots, rau ram, and cilantro—and I added more dressing until it tasted well seasoned. I then plated the salad up and topped it with crushed peanuts and fried shallots. 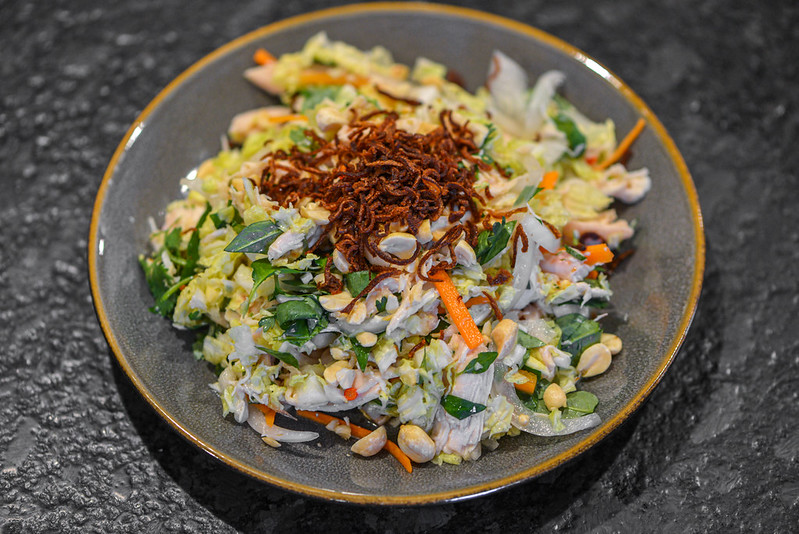 With so many strong flavored thing going into this salad, I was expecting an over-the-top flavor, but I was greeted by something more subdued and quite refreshing on a hot and humid evening. The dressing certainly lent a savory and sourness to the salad, but it wasn’t overpowering, allowing the flavors of the carrots, chicken, and cabbage to still come through. The herbs were the heavier hitters here, with the rau ram really being the defining point of the dish, but it tasted really great in this context, which gave me good clues on how to best use this herb in future recipes. The peanuts and shallots added a nice crunch, but I was actually left wishing there was a bit more contrasting crunch to the very tender salad, something that subbing in regular cabbage for the napa could do if I were to make this again. Even with the large amount of rau ram that went into the salad, it was still only a small fraction of what I had already grown in my garden, so I was all to happy to end this evening with having a little more direction on what contexts this herb is best suited for.