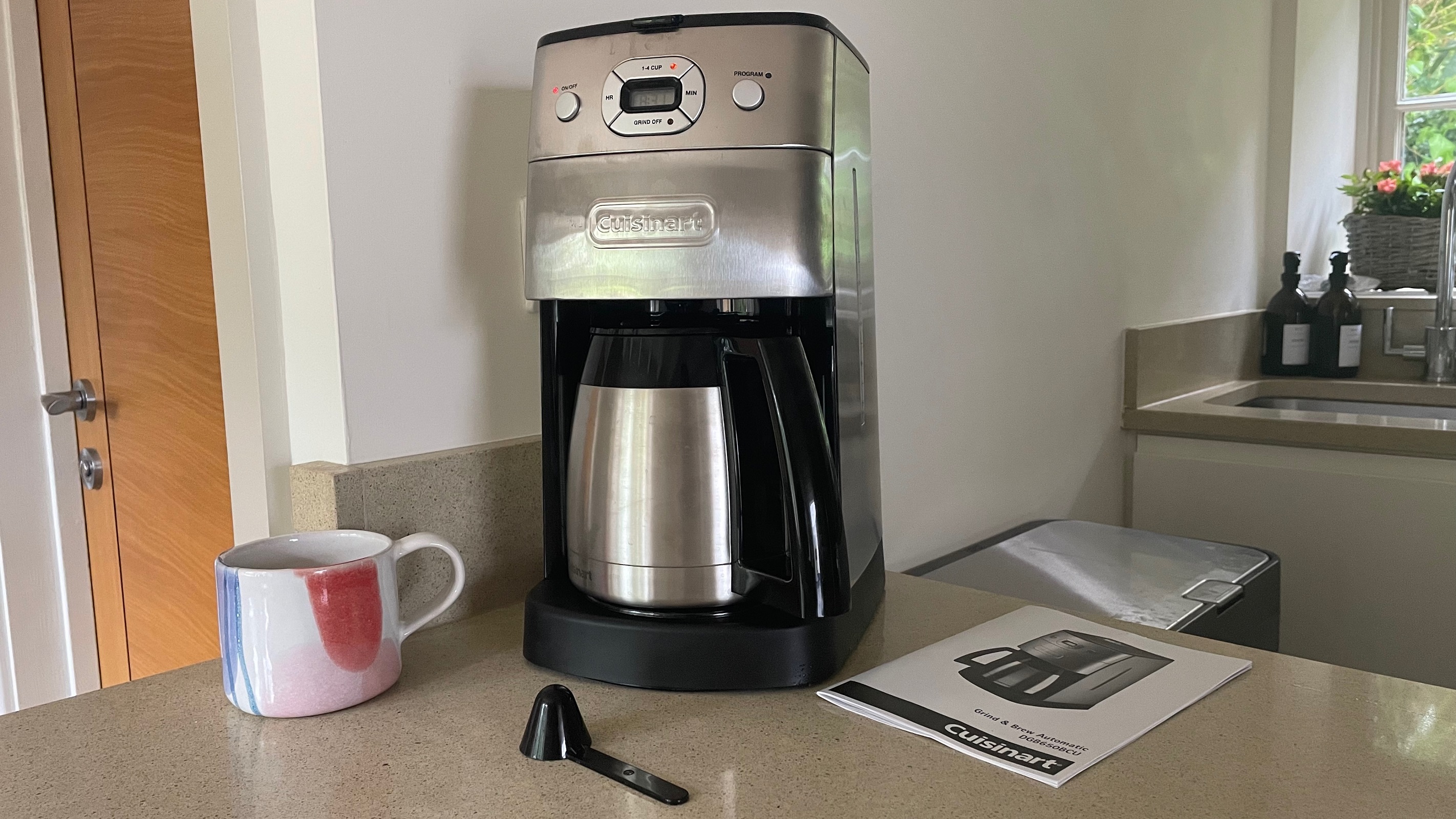 Cuisinart may be a brand that’s synonymous with food processors, and indeed that’s the appliance that launched the familiar household name. However, since debuting in the 1970s, the brand has expanded its range significantly, now offering kitchen appliances, cookware, and gadgets including some of the best coffee makers (opens in new tab).

In the US, Cuisinart offers a huge range of coffee makers, but in other countries the selection is smaller. The Grind & Brew Auto Coffee Maker DGB-650BC is available in both the US and the UK, with its built-in bean grinder making it one of the more premium filter coffee makers available from the brand.

Its ability to grind whole coffee beans, coupled with a thermal carafe with an ample 10 cup capacity, means this coffee maker promises more than your average model. But it isn’t just for whole coffee beans; the grinder can be turned off if you prefer to use ground coffee. It’s also fully programmable, so you can set it up at bedtime to deliver a fresh cup of coffee for when you wake up.

During testing we found it simple to use and set up, the thermal carafe keeps coffee hot, but the 10 cup capacity is only enough to fill five decent-sized mugs. We had to play around with the quantity of coffee to get the flavor we were looking for, but overall the Cuisinart Grind & Brew Auto makes a decent cup of coffee for minimal effort. There will be a few parts to clean at the end of brewing, however.

This model is best suited to households wanting coffee from freshly ground beans, without the hassle of getting out a separate grinder. But if you usually drink the whole carafe straight after brewing, you could save some money and get the model with the glass carafe instead.

The Cuisinart Grind & Brew Auto DGB-650BC is available directly from Cuisinart or Amazon in both the UK and the US. The bean grinding function and thermal carafe make it more expensive than the most basic filter coffee makers around. However, those who don’t require the thermal carafe should consider the Grind & Brew DGB-625BC. Aside from the glass carafe, it offers all the same features for a more wallet-friendly price of just $99.95/ £125.

The Cuisinart Grind & Brew Auto is about the size we’d expect for this style of coffee maker, measuring 15 x 8 x 8.1 inches/ 38 x 20.3 x 20.6cm (h x w x d). It can be pushed to the back of your counter, but if you have wall-mounted kitchen cupboards, keep in mind that you’ll require some space above it to flip up the lid and access the water reservoir and grinder.

This isn’t the most attractive coffee machine we’ve seen. That said, the stainless-steel exterior is inoffensive, but it does mark easily with fingerprints, which is frustrating. Setup was easy, however, with us quickly able to figure out how to assemble and start up the coffee maker.

The Cuisinart comes with two charcoal water filters to eliminate chlorine and unpleasant flavors from tap water. A filter will see you through around 90 days, and you can purchase replacements inexpensively online. The water reservoir is filled by flipping up the top lid, and there’s a water level indicator with cup markers on the side of the coffee maker.

This model doesn’t have a bean hopper, so you’ll need to fill up the grinder with fresh beans before brewing. However, if you’re using pre-ground coffee, then the “grind off” button will disable the grinder and you can add coffee straight to the filter, which hinges open at the front. All the parts are easily removable for cleaning by hand or in the dishwasher.

The uncomplicated control panel displays the time and allows you to program the coffee maker to brew coffee at any time in the following 24 hours. There’s also a 1-4 cup button that should be selected if brewing such quantities; it adjusts the process for better extraction and flavor.

We found this coffee maker simple to use and set up, and unlike espresso machines there are no tricky skills to master. First we brewed the full 10 cup maximum capacity, which took just over 10 minutes, including the grinding. The manual advises roughly one scoop of beans per cup, but not more than 14 scoops, so we opted for 12 to ensure it would be strong enough. The flavor was fresh and well rounded – not bitter or too strong – but this will vary depending on the beans you use.

At 77dB, the grinding was the noisiest part of the process. Thankfully, it didn’t last too long. The temperature of the freshly brewed coffee sat at 170oF/ 77oC, and we poured out a couple of mugs and left the rest in the carafe. Two hours later, its temperature had dropped to 151oF/ 66oC, which was still hot enough to drink. Five hours after brewing it was down to 129oF/ 54oC, which is just about hot enough – if you don’t plan to add milk. All in all, considering the coffee had been sitting in the carafe, not on a hot plate, for five hours, that’s a pretty good result.

The amount of coffee brewed is dictated by the amount of water filled into the machine, so to brew four cups – which is the equivalent of two mugs – we filled the water up to the four cup line. The manual advises that if brewing four cups or less, you should add 1½ scoops of coffee beans per cup, so we added six scoops. We also hit the 1-4 cup button for this brew; it isn’t essential that you do this, but Cuisinart says it will improve the flavor of the resulting drink. It took seven and a half minutes to brew the four cup quantity, and the resulting coffee came out at 167oF/ 75oC. Cusinart advises warming the carafe with hot water if you want your coffee hotter. As such, the next time we brewed four cups, we first poured boiling water into the carafe and let it sit for five minutes. After warming the carafe, the brewed coffee measured a slightly warmer 172oF/ 78oC.

Using ground coffee is easier than adding beans to the grinder – you simply add the ground coffee directly to the filter. You will have to remember to hit the “grind off” button, or the grinder will continue to spin. Brewing with ground coffee is quieter, with the Cuisinart Grind & Brew Auto hitting a maximum of 50dB on our noise meter. A full 10 cup brew took just under 10 minutes, which is similar to the brew time using whole beans, while a four cup brew took a speedier five minutes. We found that using pre-ground coffee resulted in a stronger drink, but it was also far more bitter – although again, this will very much depend on the coffee you use.

During brewing you can pull out the carafe to pour your coffee without any spilling, brewing will then continue when you replace the carafe. The resting plate underneath the carafe was the only part of the coffee maker that became hot through brewing; the rest of it stayed cool to the touch. We also tried out the programming function, finding it easy to set up the machine at night to brew coffee automatically in the morning – although we’d suggest a test run to ensure you get it right to avoid having to go without your morning caffeine hit.

Should I buy the Cuisinart Grind and Brew Auto?